Adlib Helps Big it up for Overtones Tour 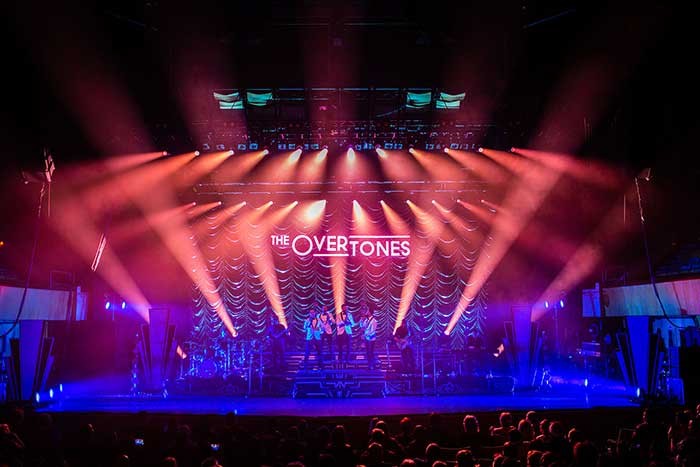 Adlib Helps Big it up for Overtones Tour

Adlib has been an equipment supplier for the band since their career took off in 2010, and it’s been a great journey for all involved to see the band’s success. Neil, now a busy freelance designer working internationally for a diverse range of clients, was working full time for Adlib back in 2010, and that’s also where his association with The Overtones started.

Ahead of this tour he got together with The Boys: Mike Crawshaw, Darren ‘Daz’ Everest, Mark Franks and newcomer Jay James Picton and they all tossed thoughts and ideas around, each one of them leading to a ‘big band’ look and style for the stage.

Understated elegance and a gentle symmetry defined the set which comprised of a central staircase flanked by two risers each side for the band, plus four signature big band art deco set pieces, which all were constructed by the very talented backline crew.

Other parameters pertinent to the design included it having to fit the budget and into one truck shared with PA and backline, as well as being scalable to fit and look good in a variety of different sized venues.

There was no video on the tour, but a super-slick Overtones LED sign at the back – custom built by Light Initiative – set the scene, positioned just in front of a spectacular silver lamé Austrian curtain from Adlib’s drapes inventory.

Every lighting fixture on the rig had to be multi-purpose and work hard in several different contexts to earn its place on the tour.

They were joined by 12 GLP X4 Bar 20 LED battens. Four Oxo Pixyline 150s, another RGBW LED batten fixture, were used to graze up the fronts of the four deco ‘bandstand’ set pieces.

Upstage on the deck, sitting on bespoke plinths made for the tour, was a row of seven Ayrton Bora S wash / FX moving heads which Neil used to create high-impact gobo effects.

He loved the 64-degree zoom and the scope and versatility this brought to the visual picture. Using a single Bora, he could silhouette all four Overtones against a kabuki cloth which dropped at the top of the show, and the stunning and intense gobo effects using all seven units impressed everyone.

They were another fixture that Neil maximised fully in the show with colourful geometric chases and cool architectural looks. “They brought a completely different dynamic to the stage and I will definitely be using them again,” he stated.

This carefully chosen and well-placed collection of very different fixtures thoughtfully programmed and intelligently used brought all the dynamics and depth that Neil envisioned, and – not that this was an issue – it pulled absolutely minimal power!

At the essence of this design was the ability to adapt and fit the basic shape and essential look into all the venues on the itinerary for full visual continuity, a plan that worked practically and seamlessly.

Neil ran all the lighting from a grandMA2 light console.

Adlib sent Tom Webber as the head lighting technician, whose vast experience and knowledge helped ensure that everything was meticulously prepped before they hit the road, and he was assisted by James Britten. “We were a great team,” commented Neil, “and everything I achieved creatively was enabled by and a reflection of how hard they worked each day to get everything in.”

He added that his and the band’s relationship to Adlib was a key to making the tour run smoothly, look great and represent great value. He lives quite close to Adlib’s new warehouse and office complex in Knowsley and comments: “The facilities and the kit they have now are world-class and truly fantastic. As someone who started off working there, it’s a great feeling to see the company grow and develop so successfully and still retain all the personal touches and relationships.”

Adlibs Jordan Willis (account manager) commented: “It is always a pleasure helping Neil to bring his creative vision to life and this was absolutely no exception. We look forward to a continued working relationship and hopefully bringing more of his projects into fruition.”