A Flare for Astera 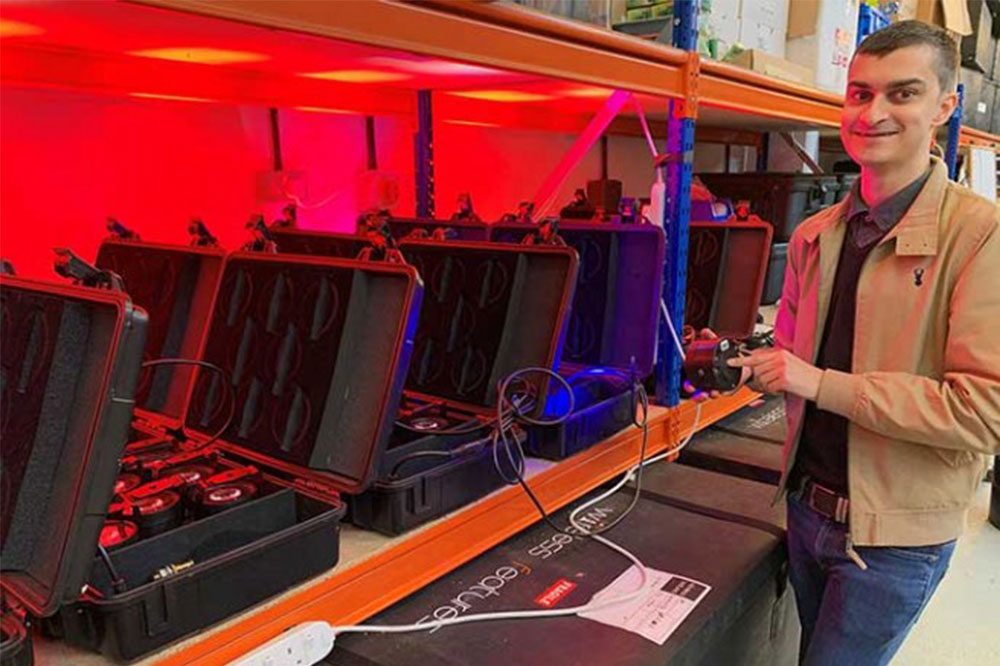 Flare is a busy and successful UK-based event lighting, visuals and technical specialist which was established by designers Ben Cash and David Amos in 2008 to facilitate their penchant and imagination for designing bespoke lighting and staging environments and realising a wide range of live events.

The company has invested heavily in Astera’s battery powered wireless LED products in the last 18 months and has over 100 AX3 LiteDrops in stock which are used in a multiplicity of ways on most of their projects.

Ben Cash explained that they originally started looking at the very compact AX3s to use as table centres covered by an opaque dome for the assorted corporate and gala dinner events that they supply. This is an application for which they needed a great looking, reliable and long-lasting LED product that was battery powered and could be easily wirelessly operated. The AX3s proved a perfect solution.

Ben and the team also soon discovered that the AX3s could be used elsewhere at events and gigs, for all kinds of set and environmental dressing, highlighting and texturing.

He’s also used them as band footlights on high-profile charity fundraisers at venues like London’s Roundhouse, which have featured performances by a succession of famous artists, and he’s also used them for lighting the back, front and inside of signs. “I usually send a couple of cases of AX3s to every job, just in case.

“They and the Astera TitanTubes, which I also use, are incredibly versatile fixtures,” he enthuses, “especially as you can also run them wired.”

Ben has also just purchased six of the eight-way TitanTube kits from Astera’s UK exclusive distributor, Ambersphere Solutions. The kits contain everything needed to deploy the tubes quickly and elegantly in a range of situations, as well as being able to charge the tube within the case.

For control, the Flare crew usually address the Astera fixtures via its proprietary app and then via their own Lumen Radio DMX transmitters into their grandMA consoles which are usually used to run the fill show/event lighting.

“The battery life is excellent – around 20 hours run-time maximum – and the fact that this can be managed, and have different times set is very useful. There are many scenarios where you might need full brightness just for an hour or two or another predefined period, and when plugged in to the mains, they can be put into ‘super’ mode for even greater intensity.”

Being able to change the flicker rate for television shows, filming and video shoots or other camera-orientated productions is also “very useful” he states, also appreciating being able to address multiple fixtures at once.

The lens options give plenty of additional scope and the magnetic bottom means that AX3s can be securely clamped to metal elements like steel floors, beams and RSJs, and the units look like they are permanently installed.

The small and neat charging box is also great for any event scenario, from making a board room look more interesting to highlighting a striking industrial setting. “Every aspect of the design for these fixtures has been thought-through,” he concludes.

Flare regularly supplies lighting for special events at the Westfield retail complex in west London, with AX3s constantly used for these shows.

They were also recently used on an experiential event for leading supermarket Tesco. “Devour”, staged in trendy Shoreditch, east London, was an immersive sensory experience combining food from Tesco’s premium Finest line with an interactive journey incorporating taste, smell, sight, touch and auditory stimuli. Sixty-four Astera AX3s helped enhance the guest experience, starting in the Bubbles Room where they energised a series of chrome balls, recreating the delicate bubbles intrinsic to champagne! In the Salt Maze Room more AX3s were deployed in the set and positioned behind pink quartz rocks fixed to the wall.