Ambersphere Provide the Solutions for Take That

The lighting rig for the Take That Live Tour 2015 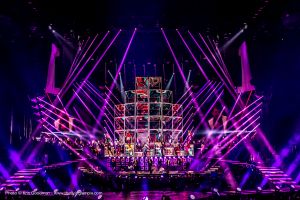 The lighting rig for the Take That Live Tour 2015 is not small.  This is a no holds barred, full-on system where no expense has been spared.  Working alongside Creative Director, Kim Gavin and Production Designer, Misty Buckley is Lighting Designer Tim Routledge. Out of Routledge’s huge design, well over half of the fixtures are from the Ambersphere Solutions family of brands. Ayrton’s exciting new MagicPanel™-R and MagicBlade™-R fixtures augment a whole host of Clay Paky moving lights while Robert Juliat followspots are the order of the day. And as for control: MA Lighting’s grandMA2 consoles are very much in command.

Over fifty of Ayrton’s MagicPanel-R units are used to create a wall on the central stage, where their versatility makes them ideal as audience blinders as well as using their continuous double rotation and effects capabilities to create a myriad of visual feasts.  Routledge, like so many, first spied the Ayrton MagicBlade-R fixtures at PLASA last year where they were a major feature on the Ambersphere stand.  Over one hundred of these are put through their paces on the show.  “The MagicBlades are not just another flashy effects tool,” says Routledge. “They really provide something very new for a designer to exploit.  On this show I’ve been able to use them as a light curtain, to mimic video content and to make optimum use of their spectacular continuous rotation feature.  They work very hard here and have proved to be a really reliable fixture.”

The already legendary Clay Paky Mythos is at the top of Routledge’s spec list.  One hundred and twenty units are given the opportunity to display their wares.  “On a stage of this size, the Mythos’ ability to maintain its sharpness all the way along its beam is a designer’s gift.  Despite the rig being 18m in height, I can still create beautiful texture on the stage, providing real theatricality to the show with the same fixtures that can really do the punchy pop stuff as well.”  Another sixty units of Sharpy Washes make up the rest of the Clay Paky luminaires providing seamless wash and colour matching that can hold its own amongst such a sea of illumination.

When it came to finding a followspot that could cut through everything on stage, there was clearly only one choice: the Robert Juliat Lancelot 4000W HTI.  There is one for each of the band; dexterity of use, completely uniform brightness of beam on the longest of throws and reliability of a premier brand are just some of the reasons for this choice.  The same could be said for the four Robert Juliat Victor 1800W MSR followspots that are used for the many other performers who occupy this vast stage space.  “If there were any issues with the quality of the spot beams I would be the first to notice as I’m calling all the cues myself, as well as running the board, which is proving an exhilarating experience on such a busy show.  With Robert Juliat, I get what I need: quality and reliability in a superbly built package.”

At the centre of this vast array of kit is, of course, the control.  Routledge is touring with three grandMA2 consoles: one test, one back-up and one live. By using MA Lighting’s VPU software package he is able to seamlessly conjoin the lighting and the video.  “The fact that our desk knows where all the lighting is in 3D and being able to direct video to all parts of the rig without having to merge multiple strands of information is all down to the MA 3D visualisation platform.  It turns what could be a really complex operation into something straightforward and efficient.”

Routledge is more than fulsome about the quality of support he’s received from Ambersphere Solutions who are the exclusive UK sales and service providers for Ayrton, Clay Paky, Robert Juliat and MA Lighting. “Ambersphere really got behind us on this,” Routledge comments,  “Working hand-in-hand with our rental supplier, Neg Earth. This is a huge rig by anyone’s standards and much of it was delivered direct to site because the units were so new, particularly the Ayrton MagicPanel-R, MagicBlade-R and the Mythos.”

“I had every confidence to work with all these new fixtures and the beta VPU software because I knew Ambersphere was there to back me up, so there was not an issue at all. It was good to know Ambersphere was there all the way and to see how they worked even harder to back up Neg Earth following their recent troubles.”

As Ambersphere Solutions Sales Director, Philip Norfolk remarks, "It’s really rewarding to be working so closely with the designer during the creative process and right through to the post delivery support of such a prestigious tour. The entire Ambersphere team at one time or another has been involved with this project, whether that has been the admin, logistics, support or service stage. Tim’s faith in our ability to support him means a great deal to us and Neg Earth’s commitment to continually invest in cutting edge equipment is what enables extraordinary events like this to happen."

“Ambersphere are definitely not your normal distributor,” concludes Routledge.  “They go above and beyond what is called for at all times.”