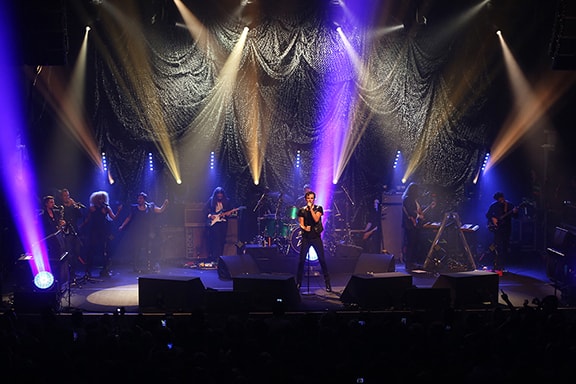 Sometimes the most original solutions are formulated from the most haphazard moments of abstract thought. Take Steven Douglas, LD for the Killers frontman, Brandon Flowers: “I had a weird thought while we were in Las Vegas for rehearsals of the promo leg of the tour way back in March. I was looking out of the window at the beam coming from the top of the Luxor Hotel and was wondering how much brighter and more defined it would be if we could switch off all the other ambient light coming from the rest of the strip. It got me thinking about how I used wash lights on stage to light the band members; how I can lose impact sometimes from the all spot and beam fixtures.”

“So I started thinking if I could find a way to light the band members from really close up. Then I wondered, ‘Would I need so many wash lights?’ And, as a resuIt, I would also have a whole lot of black space above to populate with beams.”

It was with the Clay Paky Mythos in mind for his beams that took Steven Douglas on a visit to Ambersphere Solutions. “I like the flexibility of looks that you can achieve with the Mythos but wanted to see it working in a small environment to assess if it would become overpowering in such a setting. The Ambersphere team were happy to oblige and I subsequently opted for the Mythos fixtures on my design but it was also here that I found exactly what I had been searching for apropros the wash light idea.”

“The guys had a MADesign from Ayrton in the showroom that they were using as a desk light -for the grandMA2 funnily enough. I was instantly interested in it as it was perfect for what I needed to accomplish a close-up wash; they were also architecturally interesting even when they were off and the added bonus of the RGB strip on the back was great as I figured I could use it to light the drapes in the smaller club venues where depth of stage could prove to be an issue.”

The Ayrton MADesign™ is equipped with RGBW LEDs and 45mm optics which produce everything from pastel shades to saturated colours. The upper arm is fitted with five adjustable spotlights with DMX/RDM LumenRadio™ as a standard integral fitting while, as Douglas points out, there is an independently controllable RGB backlight on the rear of the fixture. All designed to be deployed as the perfect solution for corporate events, presentations and conferences. Douglas clearly had alternative plans...

“I decided they were perfect as I could have one over the top of each band member and keep them isolated. I’ve used them as the primary wash light for the backing band and they’re used for much of the show in that way. However, they are also a great effect light for chases and strobe moments as well as the obvious solution for solo pickups.”

From Douglas’ visit to Ambersphere and meeting with Philip Norfolk and Lee House to check out the Clay Paky Mythos, he came away with a design using the Mythos, B-Eye K20s and the MADesigns – but not as a desk light for his grandMA2! At Brixton Academy, he added Sharpys, Sharpy Washes and Stormys from Clay Paky while some Ayrton MagicBlades™-Rs made a timely appearance at Shepherds Bush for the final show of the tour.

“I’ve been really pleased with the MADesigns; they do the job I envisaged exactly as I planned and more. It is also a bit special that no one has used them like this before; it is very nice to have a unique item on stage. I will definitely be using them again when the design calls for it.”