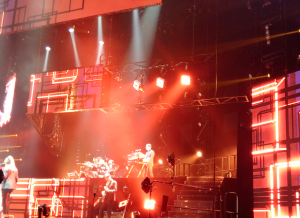 Since Ambersphere Solutions welcomed Ayrton into its family of quality distributed brands, the proliferation of Ayrton fixtures has been one of the company’s many success stories.

A dozen of Ayrton’s Magicpanels can currently be seen on the lighting rig for Olly Murs’ latest outing.  Famously just the runner-up in the X-Factor of 2009, his current UK tour includes four nights at The O2 in London before heading to Europe and then on to Australia.  At the recent Manchester Arena show, the set list was put on hold to accommodate filming Olly and his audience by the X-Factor team in preparation for his debut on the show as a judge.  Not a bad result for a performer many thought would be consigned to the Butlin’s summer season after losing out to Joe McElderry.

Production designer Paul Normandale has combined a set, video and lighting rig that places the audience focus firmly on the central artist.  The very recognisable shape of the Magicpanels can be seen on the frames that hang from the main truss symmetrically left and right of centre stage. Normandale explains his reasons for opting for the angular look of these fixtures: “It may sound a little odd but I am really drawn to the square look of the Panels.  I only included a dozen on this design but they are very obviously deployed – their very ‘squareness’ sees to that.”

Left in the capable hands of board operator, Fraser Elisha, the Panels more than hold their own in a rig that includes nearly thirty Clay Paky Sharpys and on a set that is very video orientated.  “Paul is absolutely correct about their design making them visually stand out but they wouldn’t be on the rig if they couldn’t cut through the rest of the light sources and the video content.  They are so bright; nothing gets in their way.  I love the continuous rotation facility and the flexibility of the LED sources.  We use them for about 20% of the show so I am sure there is plenty more to discover about what they are capable of.”

“Just the twelve Panels make a massive impact on the stage,” continues Elisha, “We do have a spare but my brilliant Lite Alternative crew have so much faith in their reliability we simply leave it in the truck which tells you a good deal about the quality of the build.”

“Ayrton have produced fixtures that have great functionality and reliability and look that bit different from the rest; they will always have a place in an innovative lighting plot,” concludes Normandale.  “I used the Panels on One Direction as well and we’ve just purchased some Magicblades for another tour we have going out from Lite Alternative soon.  Buying from Ambersphere we know that we’re always going to get great support and their brand range means they carry a really interesting array of products.  Over the last eighteen months, apart from the Ayrton products we’ve bought a dozen Robert Juliat followspots: Lancelots and Flos… but that’s another story.”