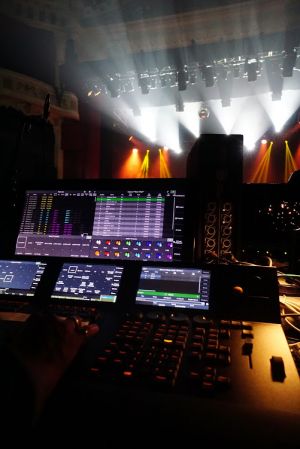 Since its unveiling at ProLight & Sound in April this year, the new dot2 range of consoles from MA Lighting has been establishing itself as yet another of the MA family of consoles that ticks all the right boxes for all the right reasons, as Matt Cowles of Ambersphere Solutions’ Technical Sales explains, “We always knew that there was a gap in the MA range that needed filling and so far it looks as though dot2 fits the bill perfectly. Its size, just 420mm x 550mm, its weight of only 7kg and its simplicity of operation are just some of the reasons that customers have been placing orders with us since its arrival in the Spring.”

Graeme Sewell of Vortex Lighting is a long-time friend of MA control as he says, “Vortex has a long history of using MA consoles. We had the first MA1 Light console available for rent in the UK (Serial No.2) and subsequently purchased both MA1 Micro Light and Full Size consoles. When MA2 Light arrived we had Serial No.9. I had been pestering MA and Ambersphere for a console with the same build quality as our larger consoles, but with a more affordable price tag for some of our smaller jobs, so investing in dot2 was a no brainer. We are very proud to have taken delivery of the first dot2 XL-F console in the UK!”

Although affordability is always a factor in any purchase decision, there are other considerations that have made the dot2 an attractive option for LX Communications. Owner, Simon Cooke elaborates, “We purchased a dot2 core; it has been used on a variety of jobs both by rental customers and production clients. The particular feature of the dot2 that attracted us was the ease of programming, particularly the inbuilt touch screens providing intuitive access to fixtures and palettes. Many of our customers in the education sector have commented on the free downloads of the dot2 on PC and 3D Visualiser which allows them to design and pre-programme shows before bringing the console in.”

Designer Michael Swan also purchased a dot2 core but opted to add a dot2 F-Wing, which offers modular playback expansion to the dot2, to his shopping list. “It just gives me that little bit more. I chose the F-Wing rather than the B-Wing simply out of personal choice – I’m more of a fader man. It is the versatility of the dot2 that works for me, in a format I can totally trust and in a package that I can pick up and walk away with. It is currently being used on a 60’s review show; it has worked on a Led Zepplin tribute act doing venues like the Shepherds Bush Empire, but MA consoles work equally well for pure theatre.”

With the review shows Swan is often faced with a less than ideal lighting rig with a variety of different light sources – some of which can be rather unexpected and possibly not the most appropriate for the job. “In these situations the dot2 is invaluable. I walk in, turn it on and it works!”

It is not just the smaller companies who are finding a market for the dot2. Fisher Productions have just invested over £500k in new lighting, control and AV. Head of Lighting & Hires, Rob Baker explains why: “The dot2 fitted our brief perfectly: brand familiarity, easy to use with advanced functionality, intuitive software, compact size, robust build quality and the cost. The dot2 goes out to events such as awards dinners and gala parties. Our load-in time is often very limited – 1-2 hours between access and guest arrival is typical, 15 minutes not unknown - so we need kit that is straightforward to operate and won’t let us down.”

At such venues, ease of functionality is a clear bonus as Baker points out, “The team at Fisher find it is intuitive, if you’re coming to it blind it talks you through patching a show, which is reassuring.”

Michael Swan also appreciates the familiarity, “If you know how to use an MA then this works for you immediately – I used the on-line tutorial and that was it. And Ambersphere is always there – a great safety net.”

Graeme Sewell is in agreement on that score, “The dot2 range will feel very familiar to anyone that has used MA in the past, but with its intuitive interface, should be easy for most operators to programme. Ambersphere have been very helpful as always and Matt is keen to listen to feedback.”

As Cowles himself concludes, “We are seeing people who are new to MA take to the console, its simplicity makes it perfect for pretty much any application which is good news for any rental company.”