It has been three monumental years for Manchester stalwarts Elbow 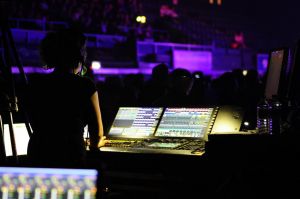 It has been three monumental years for Manchester stalwarts Elbow. Yet whatever their successes, a more unassuming and firmly grounded band you could not wish to meet. This doesn’t mean they’re averse to the odd risk, as show designer Cate Carter found out on their recent flurry of UK arena dates.

“The tour was to be short, just six dates and we had no production rehearsal. By definition I needed time to have an intricate show pre-programmed on a desk powerful enough to run a complex structure of cues and give me the time and space to be objective: More than anything I wanted time to look at what I was doing and how that affected the way I called the follow spots, the Kinesys movement cues, and how the lighting and video sat together in the show.” A taxing self-imposed brief, yet Carter chose this moment to migrate to a new operating system, a grandMA2.

“I’d started to see the grandMA2 more and more on the festival circuit and always had it in the back of my mind to get some training and try it out. Truth is I hadn’t been a big user of the original grandMA so I waited for the right opportunity. I must confess that first show I did ask myself, have I made the right decision, but in actual fact by the end of it the advantages, and particularly the rationale of objectivity I had given myself, turned out to be true. I had just three days training at Ambersphere, and then seven days programming with support from Glen Johnson up at Lite Alternative. It’s funny, when I’d first looked at the desk I thought Ooh that looks really complicated, but when I sat down with Phil Norfolk at Ambersphere it was much easier than expected.  The training was spot on and I’m really glad I made the change.”

As if this wasn’t enough, Carter also adapted her lighting design. “Originally I had been looking at a more open, transparent rear LED screen, but we needed higher definition for the content; that in turn meant I wanted a brighter punchier wash instrument behind it to penetrate the density of LED screen structure. By pure chance, and not knowing of my need for a brighter LED wash light, Phil Norfolk asked me if I’d like a look at the new Clay Paky A Leda while taking a break from grandMA2 training. The nineteen cell K10 version proved ideal. I had two demands really; I wanted a wash light with good colour and zoom; and I wanted to be able to run some unusual effects through the screen during the show. There is lots of variety available with the various makes of dish faced LED wash lights, but the A Leda gave something I needed; the ability to control individual cells. Considering their position in my design I didn’t need the streaming video capability, but being able to address each cell directly from the grandMA2 proved ideal.”

A total seven days preparation for seven days of tour proved intense, “but I had already learned enough to allow me to operate and programme in the way to which I am accustomed by the time I left,” concluded Carter. “This desk does so many different things that I haven’t even begun to contend with yet, but I will take those up as a when the opportunity arises. You don’t have to learn every feature immediately; the fact it does what I am accustomed to and has potential for much more is intriguing.”

You can be intrigued with Carter throughout 2013 when she begins her desk exploration with Ellie Goulding.