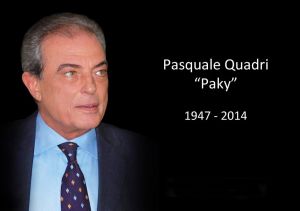 Pasquale “Paky” Quadri was a highly successful entrepreneur, although very reserved. He preferred not to appear very much but every lighting professional, all over the world, knows that he was, until today, the creative soul of Clay Paky, the Italian company that exports 97% of its production and is present, with its sophisticated luminaires, on the stages of the most important events and shows in the world. Some of the most recent that are worth remembering are the Summer Olympic Games in London, the Winter Games in Sochi, the Academy Awards, the shows by Bruno Mars and Madonna during the finals of the Superbowl, the tours of many artists such as Justin Timberlake, Lady Gaga, the Rolling Stones and, in Italy, Vasco Rossi, Ligabue, Laura Pausini and Gianna Nannini, the magic exhibitions of the Cirque du Soleil and the ballets of the Bolshoi Theatre of Moscow.

The story of Mr. Quadri, truly passionate about technology and the culture of innovation, is closely intertwined with the history of show business, and it is studded with great international successes: it was Quadri who conceived most of the Clay Paky products, from the very first lighting effects such as Astrodisco, which became an icon in the discotheques of the 70s and 80s to the legendary automated lights used in rock concerts and TV, such as Golden Scan and Sharpy, up to today’s innovative B-EYE.

The company that Quadri founded in 1976 is one of the most brilliant examples of “made in Italy” that is successful in the world. Quadri never gave in the temptation of moving the company to countries with lower costs and taxation, even though his most dangerous competitors come from those same countries: Asian companies which for years have copied his ideas, despite the 80 and more patents held by Quadri. Thanks to him, Clay Paky has obtained a total of more than 50 of the most prestigious international awards in the sector of professional show lighting.

In March this year, Quadri was awarded the prestigious Lifetime Achievement Award at the MIPA Awards held in Frankfurt during Musikmesse, the most important world trade show for musical instruments, professional sound and equipment for stage shows. Quadri was the first representative from the lighting industry to receive this prestigious prize. He had been preceded by figures who have written the history of the music industry in the world and these include, for example, the two Meyer brothers, founders of the famous loudspeaker company Meyer Sound, Fritz Sennheiser, inventor of the wireless microphone and Jim Marshall, whose amplifiers for guitar are legendary.

At the beginning of August this year, Quadri signed an agreement to transfer the ownership of Clay Paky SpA to OSRAM, one of the two most important manufacturers of lighting sources in the world, with the objective of securing further expansion for the company, also thanks to the current management team, confirmed by the German company.

Pasquale Quadri, 67, is outlived by his wife Antonella, his daughters Alessandra and Francesca, and granddaughters
Melissa and Martina.

The complete biography of Pasquale Quadri and the story of Clay Paky are available on www.claypaky.it by Monday.