Jonathan Rouse is a very busy man. This year his programming skills have already been much in demand 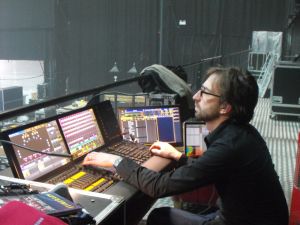 Jonathan Rouse is a very busy man. This year his programming skills have already been much in demand, working on shows as diverse as the ‘X’ Factor Live Tour, Sarah Brightman, Boyzone, Ed Sheeran, the Robbie Swings Both Ways Tour and most recently the opening and closing ceremonies of the 2014 Commonwealth Games in Glasgow. His console of choice is the grandMA2 and he is unreservedly enthusiastic in explaining why…

“I love grandMAs. I used my first grandMA when I was still primarily working in theatre productions and then demo’d the first MA2s at Earls Court in 2009. By then I had used MA1s on shows such as The Lord of Rings at London’s Theatre Royal, Drury Lane, and many productions for LD Ken Billington, including all of the “High School Musical” shows. MA consoles gave me a platform to move into other genres of the live entertainment industry and opened up a whole new world to a guy who thought he’d always be working in theatre. The grand MA2 is such an intuitive desk; it is insanely powerful without overwhelming the operator, its user-centric interface is hands-down the best that’s out there.”

As a programmer and designer who has made his considerable mark in both the theatre and touring environments, Rouse is well placed to comment on the console’s merits. Since 2010, Rouse’s talents have been seen on shows such as Diversity and Katherine Jenkins tours, television productions such as Let’s Dance for Comic Relief, and further theatre productions including Richard III at the Old Vic and the 25th Anniversary of Phantom of the Opera. “I’ve been really lucky to have had such a diverse portfolio of work come my way,” comments Rouse, “but part of that luck has to be down to what the MA2 has helped me
achieve in my programming.”

“Looking back it does seem like I’ve been using these consoles forever. They are constructed in a way that makes them so logical to use. You end up with exactly what you want without feeling that you have battled with the console to get there. In comparison, I find using other desks can be a bit like pulling teeth – they make you work very hard to achieve what you are looking for.”

As MA Lighting has continued to develop the grandMA2 range, Rouse has incorporated those innovations into his programming toolbox. “Although my work these days is probably more inclined towards the live touring sector – this year I’ve worked with lighting designer Mark Cuniffe on Ed Sheeran’s live streamed show from Vicar Street in Dublin and of course the ‘Robbie Swings Both Ways Tour’ as well as directing and programming for Pete Barnes on the ‘X’ Factor Live Tour – the theatrical skills are still used on shows such as ‘Viva Forever’ and one-offs like the BBC Proms in the Park - programming for Tim Routledge - and the
MTV EMAs at the Ziggo Dome in Amsterdam designed by Tom Kenny. And to come full circle - I would say that Mark Cuniffe’s design on Robbie’s current tour has a very theatrical flavour to it.”

“I have come to see myself as sort of ‘multi-genre’ – rather like the MA2 I guess! It is a console that works just as well for the smallest show as it does for the most complex and demanding of productions. Developments such as the Command Wing have only added to its versatility. I’ll always achieve want I want – no matter how quirky the question – it will do it.”

Rouse is currently working on the opening and closing ceremonies of the Commonwealth Games in Glasgow for Tim Routledge. “This is a really exciting project but with events of this nature, it’s imperative that you can rely totally on the desk you’re using; there simply isn’t time or space to be scratching your head or fighting with a layout that seems to put obstacles in your way. Programming shouldn’t be a time consuming facet of the process,” concludes Rouse, “For me, I think of the grand MA2 as something of a Swiss-army-knife tool to help me achieve any objective.”