Magic Blades take a slice of the action at MTV Awards 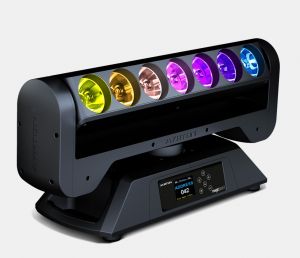 The red carpet moments at the MTV EMA Awards have grown into an occasion in their own right, demanding the kind of production values usually discovered once inside the show itself.  This year’s event at Glasgow took the red carpet celebrations to yet another level.

Lighting specialists for the film, television and entertainment sectors, Panalux, choose to invest in the brand new Magic Blades from Ayrton especially for this event.  Panalux gaffer for the MTV event was Mark Gardiner who explains why, “I was first made aware of the Magic Blades when I was sent a web-link to a stunningly programmed video clip of them in action on the Ayrton web site…the effects were fantastic, very original and really unique. I then saw them a few days later exhibited at PLASA London and wasn’t disappointed so we placed an order.”

For lighting designer, Stuart Pring, this was his first encounter with the Blades.  He opted to use thirty-six units so the original order of twenty-five had to be increased from Ayrton’s new UK distributor, Ambersphere Solutions.  Such was the urgency for the fixtures, Panalux GB’s Managing Director, Ed Pagett drove the van over himself to pick them up.

Once rigged at the Glasgow venue, it was up to Pring to put them through their paces.  “I was really excited about using the Blades for the first time.  I had been so impressed with them at PLASA; to my mind they were the most exciting product at the entire show.  When it came to using them at an actual event, they surpassed my most optimistic expectations.

They are just so bright and versatile; the continuous rotation facility means the pan and tilt have no limits; the effects they produce are truly original and dynamic; for me, they represent the next step in LED development – what many an LD has been waiting for.”

“The MTV EMA red carpet area offered me an opportunity to really see them in action and I’m extremely grateful to Panalux and Ambersphere for pulling out the stops to get thirty-six units up to the venue for me.  However, even in this setting, I don’t really feel that I have seen everything they have to offer.  I am looking forward to using them again on another show where I can really explore their potential fully.  They are simply the most exciting light on the market right now.”