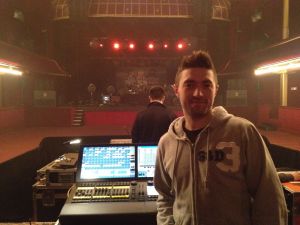 With their debut album only released in September 2013 and about to embark on a lengthy tour of the UK, Europe and the USA, London Grammar have made a rapid and memorable impact on the music scene.  So much so, they have been nominated for the 2014 Brit Awards in the Best Newcomer Category.  The trio’s style is a singular combination of intelligent, emotionally charged lyrics and musicality with its roots in the classical sounds of piano and guitar.  This is a band who clearly don’t intend to be a ‘here today, gone tomorrow’ outfit.

The same could well be said about their choice of lighting & video designer.  Steve Bewley has over a decade of experience with the likes of Dizzee Rascal  & Enter Shikari to name a few and, by his own admission, is always on the lookout for a new piece of kit that can produce the fluid creativity he looks for in the control of his rigs.  “I am using a grandMA2 Light on this tour and went to see the guys at Ambersphere Solutions to do some pre-programming on the console.  We chatted about the screen that had been spec’d for the tour – it is a new model of LED screen that works as a lighting effect as well as a screen - and Lee House, who is on their technical sales team, suggested that I would be better off using a server and then bringing all the data back into the desk.  That way, I would be able to pre-visualise as well as keep the data all contained within the system.  I could immediately see both the benefits and possibilities from a control perspective so we added an MA VPU Light and Lee and the team set up everything up for me.”

As video content continues to evolve and become more and more integrated with the stage lighting, the benefits of using the VPU are clear as Lee House himself explains, “Having the data all controlled from the grandMA2 means that the operator has everything in one place; there is no ‘third party add-on’ to deal with. All the thumbnails for the content are directly accessible on the console without any tricky set up. And - you can preview all clips from the console before they are sent live to the screen. The VPU is truly part of the system.”

Bewley himself is in complete agreement: “MA have produced a unit that fits neatly into their ‘modus operandi’.  Like the MA2 consoles, the VPU is designed to work with the operator and the way each individual likes to have a show programmed rather than having to make allowances for the DMX mapping.” A clear case of the human element being supported by the technology rather than the technology itself being in the driving seat.

“Like any new box of tricks on the market, you have to put your trust in the people who are supplying the product,” concludes Bewley.  “Lee and the rest of the Ambersphere team understood exactly what I wanted to achieve and have provided me with the perfect solution.”