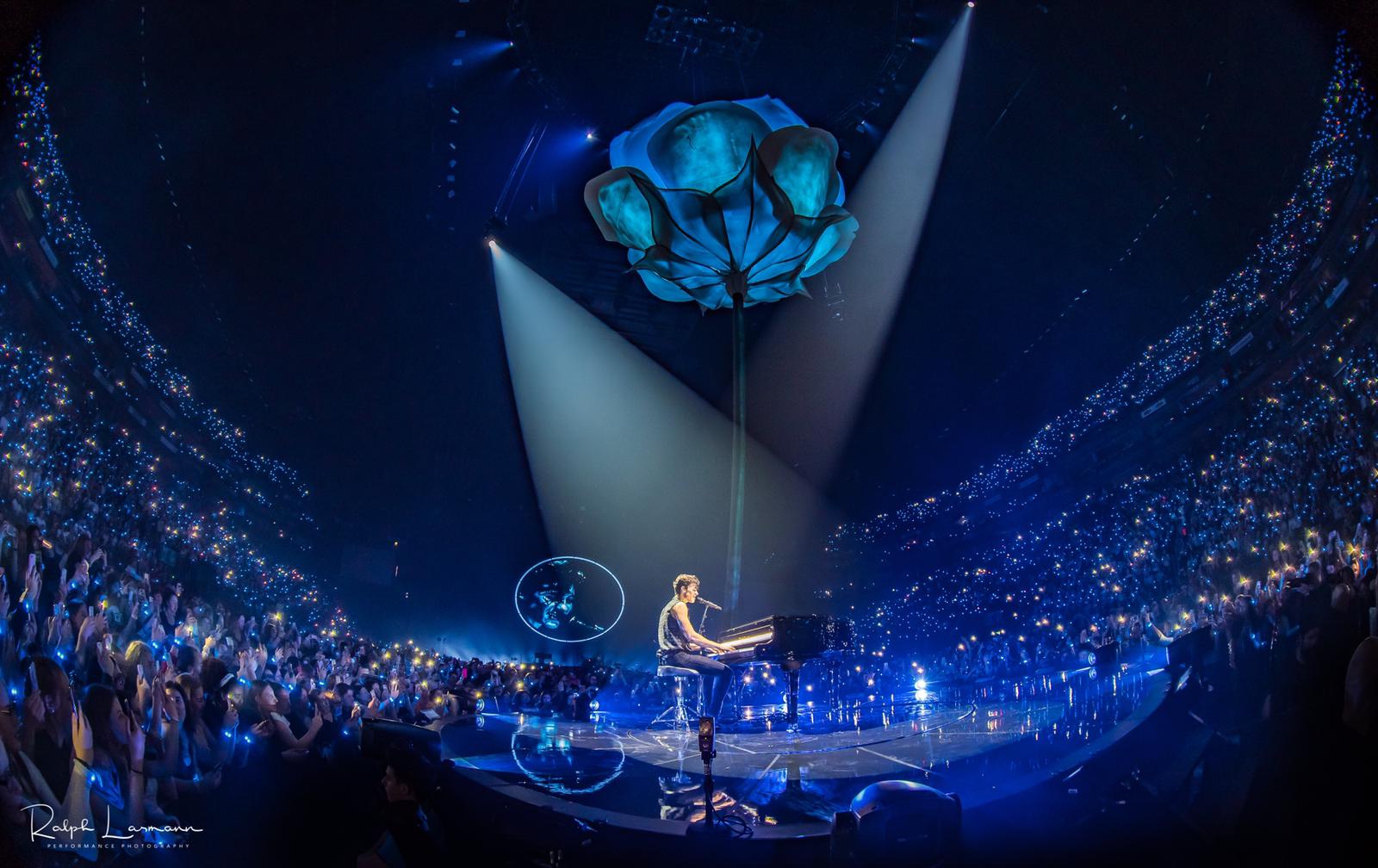 Shawn Mendes: The Tour hit the road at the beginning of March on a 9-month, 105 date world tour under a lighting rig which comprises Ayrton Khamsin-S, Ayrton Bora-S and Ayrton Mistral-S fixtures as the major components.

Lighting designer, Louis Oliver, avoided the use of follow spots or remote tracking as part of his design intent for the show, choosing instead to work with Ayrton fixtures to provide key lights for the young Canadian singer, and carve out dramatic backdrops with creative back, top and side light.

The performing area is a 40ft wide circular stage with steps downstage left and right leading to wide, open 26ft-30ft wings. This gives a 280° line of sight to audiences in most venues, and the front seats curve around the stage to bring them as close as possible to the artist. The set is overhung by a large disc shaped video screen and echoed by five curved sets of trusses hanging in a massive upstage void, all of which move on Kinesys motors.

“We wanted to keep the performance space organic, allowing the technology to hide in the background,” he says. “With the design, we wanted to craft bold environments for Shawn to perform within. We tested the new Ayrton fixtures and found they could compete with anything else on the market. Ayrton has created a range of LED fixtures you can use without compromise.”

The 78 Khamsin-S profile units are the workhorses of the show, rigged on three motorised trusses upstage of the performance area, and on the curved front- and B-stage trusses, in addition to five units strategically placed around the stage. Each of the upstage trusses and the front truss carry 15 to 21 Khamsin-S units which are used as key light and to create a multitude of atmospheric looks, effects and gobo textures to frame and enhance the performance space.

“Each song has its own colour tone and is very identifiable by this and the looks created by the position of the trusses and lighting / visual arrangement,” says Oliver. “The songs are musically and visually complementary with varying pastel colours. It’s great that the Khamsin and Bora can produce these subtle colours.”

Overhead, a rectangular mothergrid supports a circular framed LED screen and two Khamsin-S fixtures located in the centre - the only lighting directly above the stage – which are used solely for back pick up. Three additional Khamsin-S are located at stage level – one at the bottom of the central staircase to light Mendes’ big statement entrance, and one on the far edges either side of the stage to provide harsh cross light on Mendes.

Sixteen Bora-S wash fixtures are treated as floor package but are actually rigged on floor-based pre-rig truss upstage of the main stage, from which position they are used as backlighting and for aerial effects.  “The Bora are extremely versatile,” says Oliver “They provide a very noticeable source of backlight for Shawn and the band. Where the units are positioned allows them to remain out of sight until outputting. They are a fantastic complement to the Khamsin, with a larger lens and varying frost filters. Using them both provides a cohesive lighting rig.”

Nikita Jakovlev, Oliver’s assistant lighting programmer agrees: “To have a fully LED rig from a single manufacturer definitely made things easier. The colours were the same for every type of fixture used and the LED source meant there was no need to compensate for different lamp hours. I was very impressed with how bright the Boras are. They are mostly used as a band backlight/glow, and during pre-programming we had them at around 70%, but settled at 10% on site because they were so bright…which is impressive considering Bora is an LED fixture!

“I thought the shutter system on Khamsin was also very fast and efficient, and was useful for minimizing spill in the big gobo looks. And the Mistral-S proved impressively bright and super wide, managing to go wide enough to engulf the whole of the B-stage, but small enough to operate in the limited space.”

Ayrton plays a large part on the circular B-stage in the centre of the arena which is overhung with a circular truss. From this, four Khamsin-S are individually attached to lightlocks which can then move through vertical space via custom winches to create shapes around Mendes. In addition to this highly original key light on Mendes, these Khamsin also serve as additional audience lighting and add dynamic interest during the VT breaks, helping to create a mysterious vibe and draw the audience attention during transitions. “The winches allow us to quickly change the physical position of the individual lights, giving us a new box of creativity to compliment the simplicity of the B-stage,” says Oliver. “It is also exciting for the audience as the Khamsins can float a few meters above head height."

The B-stage set-up is completed by 8 Mistral-S spot fixtures sited on floor shelves to deliver effects and textures on the floor during Mendes’ piano break, acting as additional lighting on the audience and during VT moments as a more subtle alternative to audience blinders. “The whole look is more organic to match and complement the spirit of the show, and involves the audience without detracting from the action on onstage,” says Oliver.

The B-Stage’s spectacular centre-piece is a giant LED rose sculpture which reflects the album cover artwork. “We discovered early on that Khamsin has a rose gobo as standard. This was a welcome surprise as the rose is the icon of tour,” says Oliver. “It was the most used gobo in the show and we didn’t need to make 80 custom gobos!”

The move to LED lighting, which accounts for approximately 95% of the rig, was a conscious decision by the tour’s creative team which was confirmed after a successful shoot out hosted by Ambersphere, Ayrton’s exclusive UK distributor. “We all knew we wanted something new and sustainable for this tour and I was keen for us to move to LED,” explains Oliver. “We didn’t think the technology and output was quite there yet with what was on the market, then Christie Lites (the tour’s supplier) introduced us to Ayrton’s new wash and spot fixtures and we saw they could stand up against anything. They are great for all purposes and you don’t have to compromise on any features.

“From the aesthetic point of view, Ayrton is a joy to have in a rig – they are a plain black fixture with no obvious branding, super clean lines, a nice shape, and uniform in appearance across all versions. When they are not on, they are almost invisible, but if ambient light hits them (such as the light from 10,000 audience smart phones!) they still look fantastic!”

A major deciding point for Oliver was the ability for Ayrton fixtures to remain true to their original design and programming, in terms of focus, brightness, colour temperature, etc for the whole duration of the tour. “With these fixtures I know the show will look just the same at the end of the tour as it did at the start,” says Oliver.

Glyn O’Donoghue, CEO of Ambersphere, comments: “This is due to Ayrton’s superb design concept which keeps the front and back halves of the fixture separate from each other. This means that the circulation of air does not pass over the optics so the lenses remain much cleaner and the appearance of the beam remains the same as the day the tour started. From a technician’s point of view this also means a significant reduction in maintenance and man-hours on the road and in the rental house as the optics need less cleaning and the LED source does not need regular changing. This isolation is a true signature of the new generation of Ayrton fixtures which makes them unique.”

Oliver agrees: “Ayrton has always been at the forefront of LED development with their effects lighting, so they’ve been continually ahead of the game – setting standards that other manufacturers note and take inspiration from. Now they remain ahead of the game, creating a new range of LED spots, washes and multifunctional lights that truly compliment everything else in the rig. LED has come of age with these fixtures, allowing us designers to design a more sustainable, environmentally conscious show.”