The Courteeners get creative with Ambersphere brands 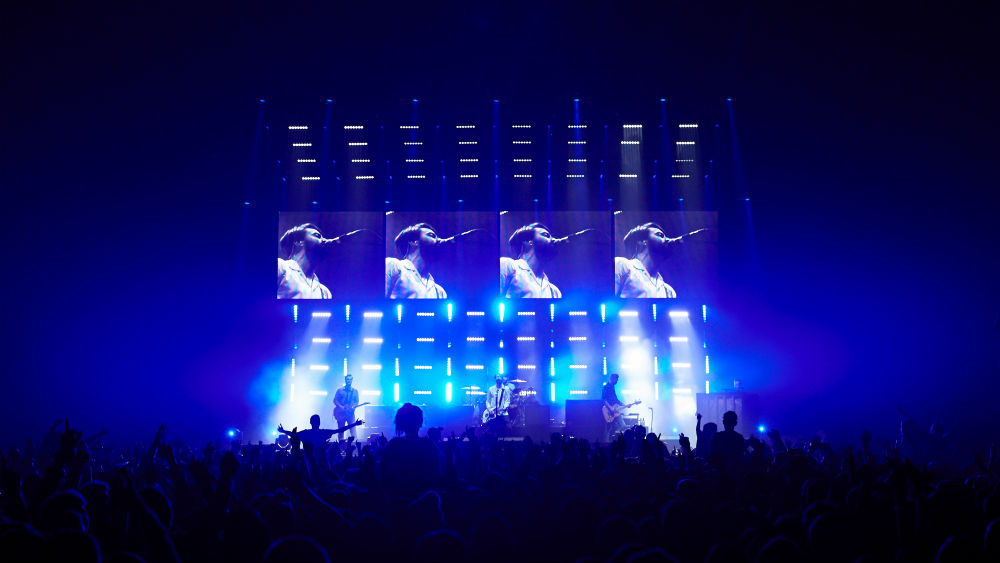 On 27th May, The Courteeners took to the stage at Emirates Old Trafford cricket ground, less than a week after the bombing atrocity at the Manchester Arena claimed so many victims.  Supported by The Charlatans, Blossoms and Cabbage, this was meant to be Courteeners’ step up from theatre and arena shows to stadium size venues but events conspired to turn the gig into something else entirely.

“What happened just a couple of miles up the road the previous week obviously had a huge effect on the event itself, especially as this was a home show for Courteeners. This made it even more important that we focused very clearly on getting all the technical aspects spot on, so everyones attention could be focusing on the other factors necessary to make the show go ahead.” Dan Hill was in control on a grandMA2 Light operating a lighting rig that was heavy on Ayrton and Claypaky fixtures as specified from Dan Hill and Chris ‘Squib’ Swain’s design house, Cassius Creative.  “The tour and the new show design started life back at the end of 2016,” says Hill.  “Up to that point, the band’s look had been with more traditional tungsten fixtures so this was a real remodelling of the entire production.  We wanted a more modern feel to this campaign and turned to Ayrton and Claypaky, both from the Ambersphere family of brands for the ideal solution.”

“At Old Trafford, the rig featured eight linear trusses, each lined with over twenty Ayrton MagicBlade-RsTM, so in total we had nearly one hundred and seventy.  This created the more contemporary look we were after and with the beamy, multi-cell MagicBlades, multiple versatile visual effects could be created.  We also incorporated a panoramic strip of video: 3.6m high by 14m across the stage that was used for live camera work in various layouts and styles – and in the layout below and above the video screen we had enough MagicBlade sources to give us a variety of pixel map and dimmer effect options.”

“In this scaled-up version of the original arena design we increased the number of Claypaky Scenius Spots as well to nearly forty.  They were chosen for their punchy animation abilities.  Big gobo effects and dynamic animation meant we could create movement without movement which really worked effectively with such a solid geometric stage structure.”

Cassius Creative completed a trio of Ambersphere sourced brands by using an MA grandMA2 Light from their own company while the rig lights were supplied by Neg Earth.  As designers, they are more than appreciative of the performance of his chosen fixtures.  “The initial challenge was taking the show from theatres into arenas, where we'd vary between using video or not depending on the available rigging points and the clearance height we were presented with.  In order to achieve a show with the required impact whatever the scenario, the design had to work as both a down-scaled back wall of MagicBlade-Rs with just a back flown truss of Scenius Spots - through to a full flown grid of MagicBlades. And, additionally, a flown video wall where possible. Whatever the gig, neither the Blades or the Scenius let us down!”

At Old Trafford, it wasn’t just the size of the venue that tested the rig as Hill explains, “Not only was this the band’s biggest show to date but the surrounding events gave it a profile and a gravitas that was hard to ignore. This was a show that had to deliver for both the band and their fans. As at any outdoor show in the summer, having lights that perform in daylight for the camera and for the audience is vital and, whilst the beams from both the MagicBlades and the Scenius came into their own in the dark through haze and smoke, having so many LED sources both behind and above the band meant that – even in daylight – the rig was still visible and effective.”